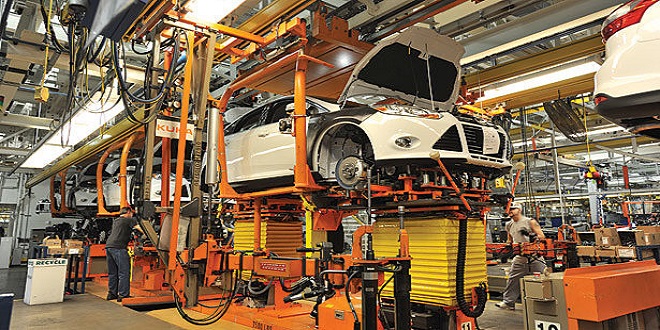 Keeping the assembly lines going at a cost-effective pace when public tastes may shift as fast as the price of oil is a challenge that can be met only with highly flexible manufacturing. Considering this seemingly permanent shift by consumers to smaller, fuelefficient models, Ford Motor Co. not only has to make its plants flexible but bring in the right products for them to build.

Getting the plants ready is the job of Joe Hinrichs, Ford Motor Co.’s Global Manufacturing Chief. To start, he said, Ford is undertaking a changeover in three North American truck/SUV factories, including those in Louisville, KY, and Cuautitlan, Mexico, as well as the Michigan Truck Plant in Wayne.

When the conversions are complete, the two U.S. plants initially will make cars and crossovers based on the global C-platform (Focus size). The Mexican plant will begin by building the smaller Fiesta. The Michigan truck plant is scheduled to begin C-platform production in 2010.

Flexible manufacturing is not the ability to produce differently badged vehicles primarily with trim differences, such as the Ford Expedition/Lincoln Navigator and Ford Escape/Mercury Mariner. That has long been done. The object is to be flexible enough to make truly different vehicles in different sizes. Although it even would be possible to produce unitbody and body-on-frame models on the same flexible lines, that would push flexibility into less efficient levels, Hinrichs said.

However, he continued, if all were unit body, a size smaller and/or larger than the primary one could easily be accommodated, such as a C-size line also making smaller (“B”) and larger (“D”) models. Going beyond those limits, he continued, would require greater robotic operating range, and the greatest efficiency and quality is with smaller, simpler robotic movements. But even within those size ranges, crossover, sedan, coupe, SUV, and luxury versions of them could be accommodated on the same line, he noted

Key to flexible manufacturing is the design of each vehicle and its components. There must be common assembly locating points for all vehicles, and the assembly process must permit almost all of the same tooling to be used. With virtual manufacturing, the process can be commonized on the computer and all tooling clearances verified for the different models and components, including powertrain

In a flexible Ford body shop (a line where the metal sections form the body), about 80% of the welding robots can be programmed to switch between different types of vehicles. At present, 87% of Ford body shops worldwide are flexible, including the one at the Michigan Truck Plant, and Ford will have converted all remaining shops by 2012.

The body shop, indicative of the flexible approach, has stations with a balcony surrounding the body buildup transfer line. Robots are strategically placed both on the balcony and at the sides of the transfer line. The robots can reach down from the balcony as well as pivot in from the sides of the line to position components and apply the maximum number of welds at an individual station.

The Information You Should Know About Antai College